A Bad Day For Mining

Today started off like so many others: coffee, blog poast, forum sperge, scan the chain. There were actives only in the C1 off our C2, some miners, and about 8 of them online, in a Proteus, blah blah, so I decided not to provoke that fight.

About 10 a.m. WST I finally got around to checking out the X877. It led to a massive 200 AU across system. I warped from planet to planet checking for POS's. Near planet 3, sure enough, and offline POS. In turning off the overview settings in order to check for Pinata I noticed suddenly a Mackinaw. Sure enough, a warp at 100 on the ore site confirmed there was a Mackinaw.

I faffed about getting my alt into something that could deal with the possibility of stabs. Can't fly a Sabre. Can't fly a Phobos, well, not with a bubble at any rate. So i settled on a dual-scram Astero, and dropped into the site...right as a second Mackinaw turned up. So, dual decloak delay and point each Mack with one of my two toons. In came a Nighthawk to save the day, but it promptly did a u-turn (200m outside scram range!) and POSed up.

I was intived to do some baiting with Rules of Acquisition and Orphans of Eve, but the connections were all 20 jumps away, and my Sigil ain't that fast. So I ended up deciding to go have lunch and my daily constitutional - a 5km walk - before tackling the housework. But first, I decided to check in on the miners in the C1.

I warped to their POS at the far planet, the one of the 3 there for which i had BM's. I noted a Rorqual was on scan, so my interest was piqued. People were mining somewhere in system, I could feel it. I checked the other two POSs....no Rorqual. Dafuq? I double-checked and confirmed it was outside the POSs, but within 1 AU. Dafuq dafuq! I began getting a battlechubby, and launched combats off scan. I warped back to one of the POSs and noted a Rorqual sitting in the bubble. Shit. Maybe someone was washing the system with off-scan probes, and saw mine, maybe the gig was up. Shit.

Then, fatefully, a Retriever logs in, sits for a few seconds, and warps off to the belt, whicch is 26 AU away. Fuck it, I haven't got a Rorq killmail yet, today will be no different, but at least I can gank a Retty or two. So I folllow to the Common perimeter Deposit. Enroute, I notice a Chimera on scan. Probably at a POS, which is also on scan, I think momentarily as I land on grid. 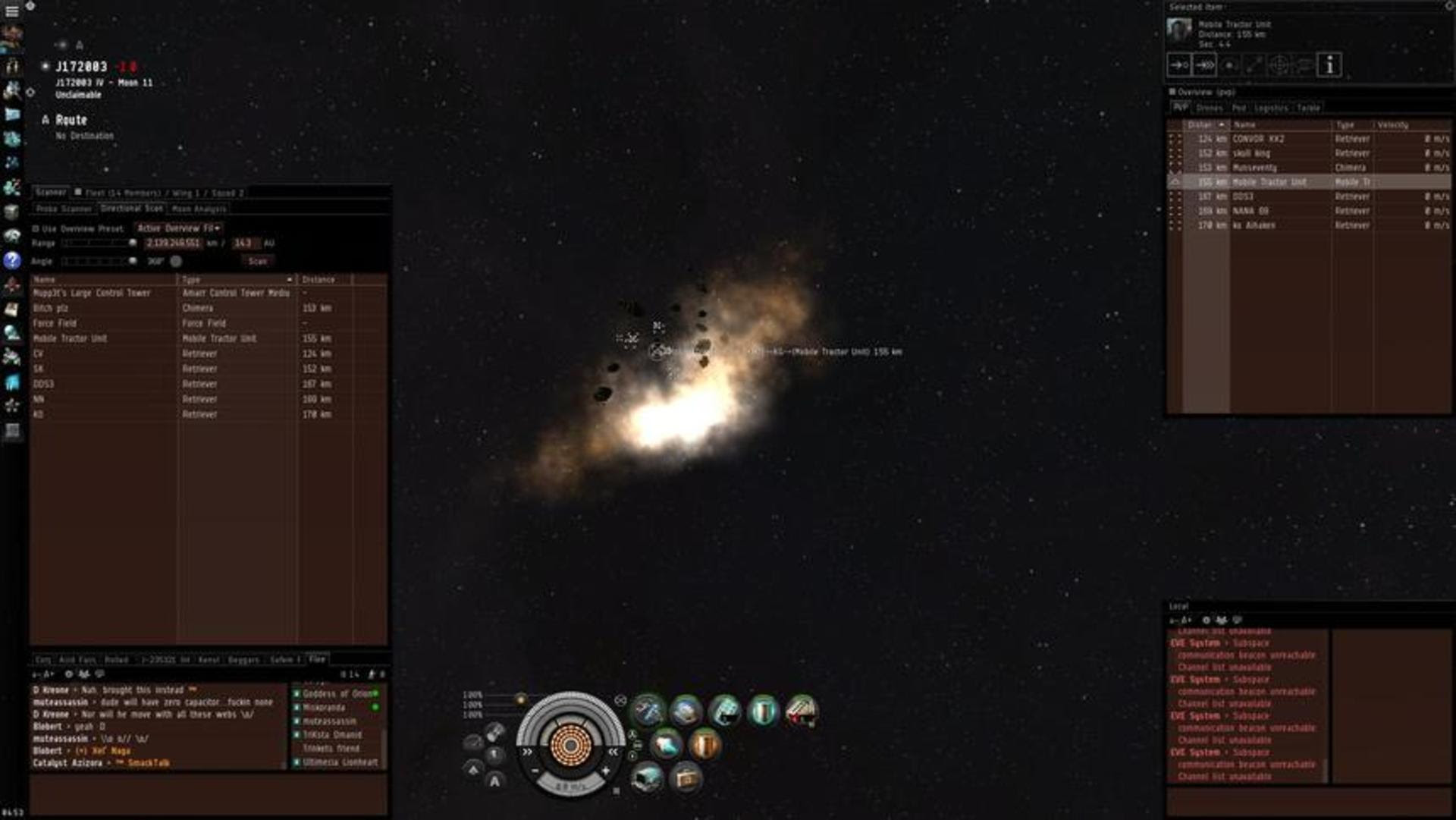 The battle chubby got painful at this point, so i withdrew to 160km and picked up the batphone.

"Yolla! Mining Chimera in a C1"

Automagically, within 15 minutes a series of U-turns were made and the fleet came barreling in from the highsec, and I #YOLO hero tackle it in my active tanked Loki, with a Stratios for backup point, in a fleet consisting of Vigilants, Pilgrims, Guardians, Proteii, etc.

It turns out that with Guardians feeding my Loki cap I can tank a carrier's DPS forever, basically, so I did the majority of the tanking until we cap-raped the poor thing and sent him and some of his mates back to highsec.

3B in ISK killed is a good start to the month, plus the 400M in Macks from earlier. If we can keep this up, we'll be the unofficial #5 on the league ladder of wormhole corps again.

Posted by Trinkets friend at 01:33