When I stumbled into lowsec and got instantly killed because I didn't even realise that people could attack you, I didn't even know there was a Local within which to rage and bitch. I did, however, rage quit for a day. That was one fucking expensive kestrel, yo. About 3 million ISKs I had no idea how to replace. I then even went further, vowing to hunt the guy down and avenge my kestrel upon him.

If only I had known about Local, I could have made a gigantic pillock of myself instantly, carrying on like a pork chop and calling people douches in Local.

That's the salt factor at 3 days for this guy. Imagine him at 1 week!
Posted by Trinkets friend at 16:25 1 comment:

I love a good Reddit thread. Especially one where a Nyx kill devolves into nerd sperge about goons and cheap Bhaals

Example the First
Posted by Trinkets friend at 06:13 No comments:

The early bird gets the Nyx

So, the way it usually works in the lowsec "coalition" that I hang around with is that if TF is online, you don't get a Nyx kill. So, unusually today, I woke up at 5:15 a.m. Perth time, after not drinking enough bourbon last night to have a hangover, had a shower, made a coffee and logged in...

...and chatter on comms was all "HICs log-in. Dreads undock."

And then it was "Oh man, TF is here, we won't get a kill." because I am obviously a curse upon these things.

But not today. After the last Nyx kill, I think my hoodoo is broken. 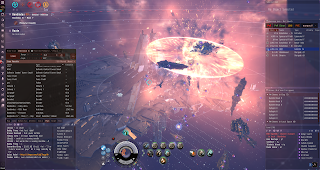 Posted by Trinkets friend at 14:08 No comments:

So, the wash-up from the changes to leadership and boosting is that the YUGE multiple tiers of leadership skills have been essentially compressed, resulting in the deprecation of about 3M skill points in leadership have disappeared.

Not to put too fine a point on it, that's a couple of months of subscription that CCP just nuked the value of.

For wormhole space, newbros have always found it difficult to fit in to an organisation made up of veterans (bitter or otherwise) and elite players. The prime difficulties faced by newbros in w-space doctrines (PVE or otherwise) are ones of skill, ships and resources.

Newbros lack the skill points to fly everything, so you need an acceptable option for them to fly which isn't too skill intensive. This is especially true if, in 24 hours, you want to take alpha clones into your corporation. Sure, you can skill injest these days, but expecting everyone to skill inject just to fly a doctrine, you'd better have some pretty flush newbros or some fixed doctrines.

They also often lack the ISK to employ the "if you can't afford to lose it, don't fly it" dictum. So you need an option which is cost effective - not only cheap, but also not needlessly expensive. There's no point setting up a newbro doctrine if it includes B-type hardeners or faction propulsion because "it's just o effective" or you think it needs it.

Finally, often newbros just lack resources in-game. For someone with years of playing, this isn't just liquid ISK, but it extends to having spare hulls, so you can go from shield to armour doctrine at the drop of a hat. It extends to having a bearing setup, a PI chain, and the knowledge base to exploit whatever they can do to the utmost, in an effective manner. This extends to those who want to skill inject to bring their toons up to scratch but don't want to just lay out hundreds in hard-earnt and haven't devoted hundreds of hours to grinding ISK.

So, you have to devote a bit of time to developing a doctrine for your noobs. To my mind it needs several things.

Firstly, you need an SRP program for T1 hulls up to at least cruiser size. We used to run full SRP on assault frigs and logi cruisers, which allowed us to fly an Enyo - Exequror doctrine or Jag - Scythe. These days, i'd extend that to T1 cruisers, flat, and to all T2 frigs except Covops. If you are willing to drop several Gilas and a Scimi or two into a brawl, you are risking well over a billion. If you have 4 newbros in T1 EWAR cruisers, the total cost is 10% of the rest of your fleet, or less.

Secondly, you have to realise that newbros are most effective in bait, ECM and support roles. They make good tackle, if they are trained up, but tackling and surviving long enough to do the job properly is not the same as having a Crucifier and a no-fucks attitude. Often a skilled ceptor pilot can survive as tackle, scout well, and live. A disposable newbro tackler is just a wasted opportunity for a gay-making Maulus or a underutilised Vigil role.

EWAR is a huge force multiplier, especially damps versus logis or even, these days, a Vigil Fleet Issue with an 18km web, or a Arbitrator with properly scripted TD's. I've always encouraged my newbros to train ECM first, to a basic level, and provided them with appropriate cheap, nasty and SRP'd fits to fly.

Bait wise, you can consider op-specific SRP for, say, Procurers or ratting baits. so your newbros are comfortable losing bait for the sake of pew pew.

Separately, you should work on effective newbro friendly ratting setups. An organisation is only as good as its resilience, and that comes down to resources. Provide enough advice, training, and a magic playbook for the newbros to skill up, and ISK up, and you've got a better chance of them sticking around.

The thing about Ascension and Alpha Clones is, no longer do your guys need to strictly justify their gaming in terms of value for money. People won't necessarily quit playing just because the game isn't worth $15/mo. It's going to be more about value for their time invested. Whilst Alphas are restricted in terms of some high-end wormhole content (leaving aside C5 Wolf Rayet ratting, or high-end gassing), with a bit of help from experienced players, there's not a huge amount they can't realistically do in wormholes with some work-arounds and a structured environment.

The key will be to provide that structure, and content drivers, to keep people playing. Making a doctrine for them so they feel part of the war machine is a good first step.
Posted by Trinkets friend at 14:45 No comments:

On the positive side, you can neutralise an Aeon's fighter bombers with a Falcon and a Widow. So, that's a positive outcome.

Posted by Trinkets friend at 16:25 No comments:

All content takes to create is a week's worth of finding absolutely nothing in wormholes, then finding a way out to Solar Fleet renter space, and someone's Thanatos coming off its third insurance contract. Oh, and a bottle of cheap but good shiraz. Mostly the latter, because then TF is all "Fuck it, you now what we should do, we should go tackle a ratting carrier and drop your carrier on it, we'll own them."

So it came to pass, kind of.

We got out to perrigen / Spire botlands and found evidence of a ratting HAW moros (because, you know, what else?) and in the midst of people stumbling about wondering if it was at POS or not, the inevitable "defense fleet" assembled.

So we dropped on that - a Sabre, a cyno Stiletto (died instantly), a thorax (we started it as a suicide T1 cruiser roam), and a Vagabond plus the aferementioned suicide thanny.

So we pwned our way through the enemy fleet. THe kill order was probably a bit wrong, because the Thanny killed the Rapier, then Dominix, then Phobos, Ishtar, onyx, cerbs, etc.

With hindsight, it should have been Rapier, HICs, then trash because there was perhaps 10 seconds there when the Thanny could have cynoed out or warped out before his cap got neuted down too far and points went on. Missed opportunity.

Then it was all Nyxes and hels and the ratting Moros landing on field...and the crafty bugger in the Vagabond doing what Vagabond DNA knows best - kiting off at the end and GTFOing.

Fortizar where art thou defences?

Roll up to a Fortizar with some bombers. No one dies, shit gets RFed because the owners aren't around.

What a joke.
Posted by Trinkets friend at 07:32 No comments: 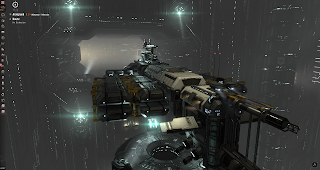 The Dankmaster5000 is ready to sail by end November with the new mining fighter drones to make the dankest ISK in the quietest nullsec, lowsec and wormhole systems accessible via whatever dumbass S199, N944 or N432 I can find!