Having now successfully impersonated a dev, I deserve a ban, a la this TMC article.

I am not surprised that CCP is getting rather thin-skinned and is basically trying to act like the NSA on poor publicity. While i don't completely agree with Vos on all his points, I do agree that when CCP devs are unable to take a meme as a joke, they really need to have a long, hard look at themselves.


Sure, ban people for "impersonation". It would help, however, if you got a proper definition of impersonation first, you fucking imbeciles. Creating what is essentially a meme is not impersonation. 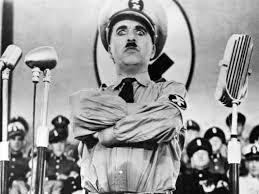 No one would have convicted Charlie Chaplin of war crimes, genocide and anti-semitism for this, would they? CCP would. They would have permabanned Chaplin instantly.

If we all risk a permaban for comedic impersonation of CCP Devs, then CCP is on a terrible, slippery slope to self-destruction of whatever community goodwill they have left.

The other part of the ban which is distrurbing is that CCP went to the extent of banning this person for entirely out of game behaviour, via linking the user's email to the email used for their account.

This is a dangerous precedent for the company, which is basically saying they will, if they feel the need, run a background check or trawl the web for any content they feel could give them an excuse to ban who they want to ban. This would include, for instance, calling a dev a cock puppet repeatedly or any number of other things tangentially related to the EULA, on any public message board or in any space upon the internet. Or maybe not; you'd never know and never get a fair hearing, or any hearing at all.

It is very dubious to ban someone using an agreement governing conduct in game and on the game's forums for behaviour out of the game and not on the game's forums. At it's most basic, the EULA governs only those domains and servers and properties CCP owns and you pay for. You agree to abide by their rules while playing their game on their servers. It would be interesting to see if you could turn up to and EVE player gathering and do a live stand-up impersonation of a Dev and get banned - that's the level CCP is sinking to.

You have been warned. No impersonating Fozzie, no matter ho bad it is.
Posted by Trinkets friend at 19:50