You are welcome to delve deeply into the threadnaught if you so wish, but I warn you, there's a lot of hirsute necks quoting formulas at each other and getting wildly different results because, apparently, math is hard. They then argue back and forth like whiny tards for pages.

I put my 2c in there, which is basically pointing out that these modules are going to unbalance the game in so many ways it is ridiculous. We saw this with the proliferation of drone buff modules resulting in increasing one-way bets on drones, the end result of which was Skynet carriers becoming out of control to the point where all you needed to defend your home against everyone forever was a Garmur with faction point - the Firbolgs would do the rest with intense speed, unbelievable tracking, and 2,100 DPS. The IShtar became god mode ridiculous, outclassing every other ship in the game, and the Gila and Rattlesnake became stupid stronk.

There is a genuine risk of the God Mode baton being passed to the ships with existing range bonuses to missiles  - Talwar, Jackdaw, Orthrus, Cerberus, Barghest - or existing application buffs, which is the Typhoon.

One thing I continually harp on about, while trying to herd by alliance's training queue decisions and purchasing habits for ships, is damage projection being king. 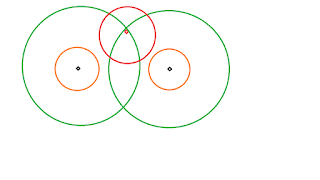 The enemy ship's weapon range is the red circle, which you don't want to get within because you cannot tank it. This is a common kiting situation for small gang (aka "microgang"), and for dealing with large, powerful, immobile and dangerous foes (such as carriers and battleships).

Short range guns (orange) mean that if you are separated in space and one of you gets tackled, you cannot assist your friend without spending time motoring toward him and getting within the enemy's weapon range. In a game where, for example, you have 60K EHP and are suffering 500 DPS, 30 seconds of travel to get within range and apply your own DPS will probably see one of you die. If ou then get tackled by your enemy, your second ship may die too.

Using long range weapons (green), even if slightly less powerful, means firstly, you can shoot the enemy beyond his own weapon range, to weaken him even if he is going to eventually run you down and get tackle. Additionally, the second ship can also add it's DPS to the fight without taking damage, even if the first ship is tackled. Finally, if the first ship dies, the second ship gets to fire at the foe as the foe closes on it, which may weaken it enough to prevail.

Of course, yes, in a game of hypothetical rock-paper-scissors-lizard-spock, you can say "but what if the foe can tank your ships" etc, like a Sleipnir. Well, having kitey, long range projection allows one or both ships to escape even if they cannot win.

Thus, the issue which will arise with the missile guidance computers is going to be HAM Orthrus with 650 DPS to 70-80km. Just add a paint and web ship like all good anano gangs do, and shit is going to get skwerly. Or even damage buffed HML Cerberus, 580 DPS to the edge of the grid.

With the missile modules, Cerbs and Orthrus will fire to 150km plus with no falloff and uniform, predictable damage. Also, remember, damage application will increase overall due to a four-way buff. They will also, if tackled or under threat at short range, have no tracking issues. Thus the damage projection equations which are consuming so much time on the forums are, to my mind, almost secondary to the real problem for gang and fleet combat, which is ensuring damage projection for missiles doesn't get out of control because it will come with a commensurate buff to application in the same package.

The real kicker is also if you do use a set of ships with absolute dominance in damage projection, which can out-range every opponent, they don't need tank. When people figure out how to fight without tank, at extreme range, you end up with Slippery Pete doctrines. it's only a matter of time before this comes to missile boats as well in some form.

Posted by Trinkets friend at 17:49