A change is as good as a holiday

Moving holes is a horrible experience, especially if you have 9 POSs and 90 toons worth of shit. Rough numbers are:
2M m3 of POS crap. This included 240 sensor damp batteries. Plus we had to set up 80 sensor damps on our new POS in our target hole, which is about 3 hours of solid onlining.
450 ships at least. Of these, about 70 were crappy T1 ships and found their way into sleeper sites, stripped of modules, because Sleepers kill them faster than you can SD them. The rest are, as usual, spread from asshole to breakfast. Luckily the Bowhead exists now and things were collected in our head office / staging system fairly quickly.
About 1M m3 of general shit. Luckily about 750,000 cubes of this was ore, which was conventiently compressed into a sole Miasmos. Which was worth a couple of billion as it YOLOed out the C2 chain unescorted. Wormholes are empty, what can I say?

So the Mullet Hole is no more. Well, besides a placeholder POS with an alt, to stay there for a few months while people re-sub and re-app to corp and grab a probing heron and find their way out.

it was a good hole, the Mullet Hole. We moved in a year and a bit ago, when C4's were going to gain their second static. We took a punt that C4 space would hot up with PVP corps moving in. This kinda happened. I mean, there's more PVP corps in C4's but there's less people playing the game overall, so we were finding our X877 chain to be more of a drag than a benefit. We hadn't ratted in our C4 for months, and could barely be bothered ratting our home sites every week. C2 relic sites, combat sites and PI was enough for most people.

So we decided to move to a C4 with N766 and C247, C2 and C3. We considered going for an effect, as our vanilla hole was good, but we wanted something more.

I vetoed Wolf Rayet instantly, as it's pretty much a boring and shit meta of Hecates, triple-damp RLML Caracals and Garmurs. Yawn.

Pulsars are where the big PVP hero corps hang out for some reason, so evictions are whoever turns up with the most Rattlesnakes. Last C4 pulsar eviction I attended it was 80 Rattlers vs 35 Rattlers. Yawn.

Cats are all owned by Russians with Domiballs. This is effectively Bhaaldoctrine, to crush capacitor, and we couldn't field enough Bhaals or Domis to take on the Russian C4 mafia. So that's out of the question.

Magnetars are bear holes. If you krab in C5 mags, i guess you prawn in C4's. The other problem is the intense testicle pain which is caused by ratting C4 mags. Lock range down 54% is a whorish pain in the arse, even with MJD phoons. You can't apply your DPS well at range in anything, except perhaps rail Tengu fleets, but there's no advantage at that point anyway versus vanilla. PVP wise, mags are always a shit a helmet. Kiboshed.

Red Giant is maybe OK with specific defense setups, but with no compelling advantage, it's just a vanilla hole with a different nebula. So we kiboshed that.

Which left us with Black Holes, the unloved stepchild of environments. There are only two C2 + c3 Black Holes, and out of 500 C4's the oddds were stacked against us as we began ragerolling casually for C2 + c3 holes. We found one of the two Black Holes about 3 weeks ago, inserted an alt. The defenders are semi-competent bittervets with two large faction towers with huge arrays of faction guns. I knew one of them from years ago, he taught me precisely zero about how to PVP despite claiming he was a god. I guess he was in 2006. Nowadays, godly PVP occurs by flying daredevils around a C4 BH or duelling week old noobs in Amarr.

After some time casing the joint, getting a siege plan in order, organising US-EU TZ coverage via some allies, and a week cleaning out Mullet Hole, we were ready.

I was jacking up the siege tower on Invasion Night when the C247 re-spawned. I jumped in, found a random T405, and viola, it was to the only other C4 Black Hole in game with the two statics we wanted and some clownishly bad Russian POS. So we elected to take the easy route, spent 4 hours sieging with Trashcats to neutralise the POS defences, and at midnight the first capital ship of the defenders went up in smoke - Rorqual and soon Archon. 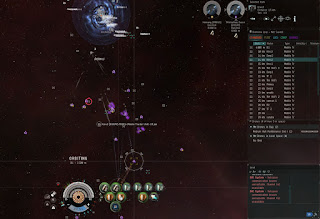 Seems they all but moved out 4 months ago after living in the hole 1.5 years. Google Translate insults were exchanged, mothers hourly rates compared, and now we await the batphone with the penis totem of 80 sensor damps erected on our POS.
Posted by Trinkets friend at 00:32