Bringing Back the Vigil

Rooks and Kings was one of the first organisations to really begin pushing the T3 cruiser meta, working up off the old Armour HAC doctrines so famously espoused by Shedoo (amongst others).

The recipe for success is fairly simple;
Add a bunch of low-sig long-range fit heavily brick-tanked armour boats with good resists
Ensure you have whoppingly awesome overblown logi (like, at least 25% of your fleet if not triage)
Kill all webbers
Keep moving and maximise transversal
Pew pew pew!

The whole doctrine (one of the few coherent doctrines) relies on two formulae; the tracking formula, and the missile formula. Both of these work for low-sig armour tanked AHAC/T3 doctrines because sig radius becomes important to shed inbound DPS. Yeah, yeah, preaching to the choir - you all know this. A lot of you, however, have got it via received wisdom (everyone else flies armour T3 blobs so you do) and use it because you don't need to know how a jet engine works in order to sit in an airplane. Some others know how it works, in principle, but you aren't really au fait with the exact specifics and limitations.

The key element of the AHAC Doctrine is signature radius and a limited minimum mobility. Seems straightforward, right? But what does it mean in practical terms. To explain this, I'll resort to graphs.

First the conditions of the experiment;
PYFA 1.13.2 DPS graphs were created for the following ship shooting Barrage M
Drone DPS was excluded as it's irrelevant to the argument (mostly)

The target was assumed to maintain a 1700m/s velocity (mostly because some variables have to remain constant). The target signature was analysed for values of 125, 250, 325, 500, 625, 750 and 1000m. Angular velocity was fixed at 45, 60 and 90 degrees for each signature radius increment. The values were collated and are presented in the following radar graphs.

How you read the graph is that the further from the centre, the higher the inflicted DPS.  The sig radius of the target increases counter clockwise from 0 to 1000. The angular velocity to the target is the colour of the line. 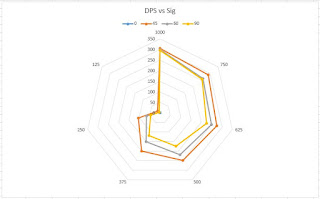 At 5km the Rupture in question has trouble hitting the target if it is moving at a higher angular velocity – no surprises. However the different in DPS between low and high angular velocity is not very marked compared to the influence of signature radius. For example, if sig drops below about 375, for each 125m less sig radius the inflicted DPS nearly halves. At 125m sig at 5km your damage is almost zero; at 250m sig it's 105 DPS.

The same holds true at 15km – here you can see that sig is less of a factor at 15km when it’s above about 375m regardless of angular or true velocity. The enemy is in the butter zone. But if you reduce the sig to 125m tracking and DPS fall apart dramatically and angular velocity becomes important again, though not as much of a factor as sig radius. 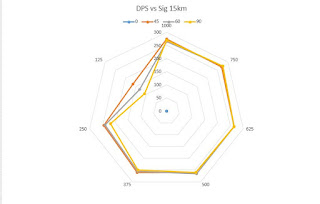 So, what are the lessons?

Firstly, without over generalising on account of each weapon system being different (and missiles being a separate case), you have to consider the little-known stat of weapon signature resolution before considering the usual rigamarole of tracking formula. If your sig radius is above the weapon’s signature resolution, you take more or less full DPS. I mean, something with 1700m/s velocity at 15km is common. At 5km, fairly unusual in sustained circumstances. So tracking of the guns isn’t the whole picture if the DPS applied to the target at 15km does wild hijinks when its sig resolution gets down to the gun resolution. That stands to logic.

AHAC doctrine works because you start with a low sig ship, such as a T3 with the correct subsystem, and you stick to an AB, then you double-down by getting maximum skirmish links in Evasive maneuvering and trim another 30% off that. You can often get hulls down to the 60-120m signature resolution with base 120K+ EHP. Just from the above work-through, you can see that sig by itself adds another 50-75% damage shedding on top of the EHP and that’s against cruiser guns.

Countermeasures are few. Two 60% webs on a target will help a little, mostly with reducing angular velocity (unless you screw yourself by orbiting too vigorously). Range is mostly irrelevant unless you are a blaster boat or fight deep in fall-off. In fact, if you get to close, tracking falls apart, so webs are at most useful for range control and mobility control to maintain tackle.

No, the best cure to an AHAC doctrine gang is in fact the humble Vigil, or if you feel pimped, the Hyena. Twin meta 4 TP’s will blow your target’s sig up by an added 90%. You can stack 6 EWAR mods on, so if you dose the target with >100% sig you’ll push it back up the sig radius curve and into full damage territory – certainly up from say 5 DPS applied back to 100 DPS applied. That’s a shitload of extra applied DPS.

That's woeth putting a toon into a fabulously mobile little firgate to fuck your foes in the cornhole. hard.
Posted by Trinkets friend at 00:50