"Something is wrong with our bloody ships!"

So is the quote attributed to Lord Jellicoe in the Battle of Jutland when the British Battlecruisers were popping like champagne corks under fire from the German dreadnoughts. It was probably poor design of the magazines and poor discipline in the magazine and turrets with cordite charges. Ammo choice sank ships.

Tonight I dropped a buffer gank Cyclone into a bubble in nullsec where a Gila was camping, with a battle Falcon to jam his drones out. It did not go to plan; 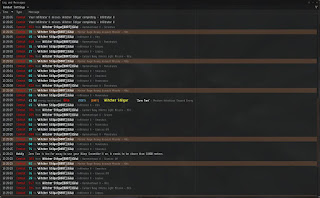 So, HAM application versus a shield fit cruiser is...worse than a single fucking medium drone apparently.

Plus missing 4 jams in a row on the dude's drones, and I was lucky to get out both my ships in structure when, on paper I had 70K EHP, 720 DPS Cyclone versus an ASB fit Gila with 500 DPS and 54K EHP (buffer plus charges).

In reality I had 150 DPS because, somehow, HAM application vs cruisers is 10%.

Fuck this game is bullshit sometimes.
Posted by Trinkets friend at 07:03