It's no real secret that wormhole corps, even in C4 down, build capitals and use capitals for running sites (mostly escalations in C5-6) and in home defense. Home defense use in low-end wormholes is a fairly rare event, and in my experience, doesn't really work. By the time your POS is fucked, your caps are being trolled out, or are generally useless, especially if you've done a good job of making your POS a decent POS (thereby requiring unfeasibly large numbers of attackers to get to a position requiring a capital).

However, there have been a fair few low-class residents using Skynet carriers. For example, there was the Skynet War Library example, and some others recently where people have built a few Thanatos and just "PVP" on highsec wormholes using buffer Proteus with assigned fighters. We recently found an Epta Team C4 W-R where they were using Garmurs with assigned fighters to rat, and we thought, what a great idea. Conjoin two of the most broken things in the game and use the Skynet to harvest the home sites for alliance income!

Fortunately, our massive build-out of C4 caps is now halted due to the end of Skynet thanks to the proposed balance passes in Scylla.

Overall I agree with the balance changes. It stands to be seen whether their second soft-nerf to ishtars actually does anything. Let's be honest, a 25% HP buff to sentries as opposed to the 50% of now, isn't going to do diddly squat. 25% DPS bonus versus 50% is good...but this drops from 620 (ish) to 530-ish. This means you need 25% more Ishtar to achieve the same level of OP.

Comparatively, the drones of Ishtars alone will still out-DPS Zealots, Vagas, Sacrileges, Eagles, Munnins. Deimos will still be a formidable death toboggan, but won't have any damage projection so it isn't a fleet ship.

The real nerf is to the Bouncer drone, not the ship, which is odd. The Curator II will just replace it as the Drone Du Jour. The Ishtar will just have to sit 10km closer to the enemy....oh wait, no it won't because the drones will keep attacking regardless. it shifts the balance between optimal and suboptimal tracking of close targets to equally good tracking but more random damage in falloff - and as we know, the whole ishtar doctrine relies on fighting in falloff against microwarping enemies with giant sigs. So...yay? Soft nerf is soft.

This also, comparatively, nerfs all other drone doctrines and nerfs most POS bashing setups. So we will see what the upshot of that is. 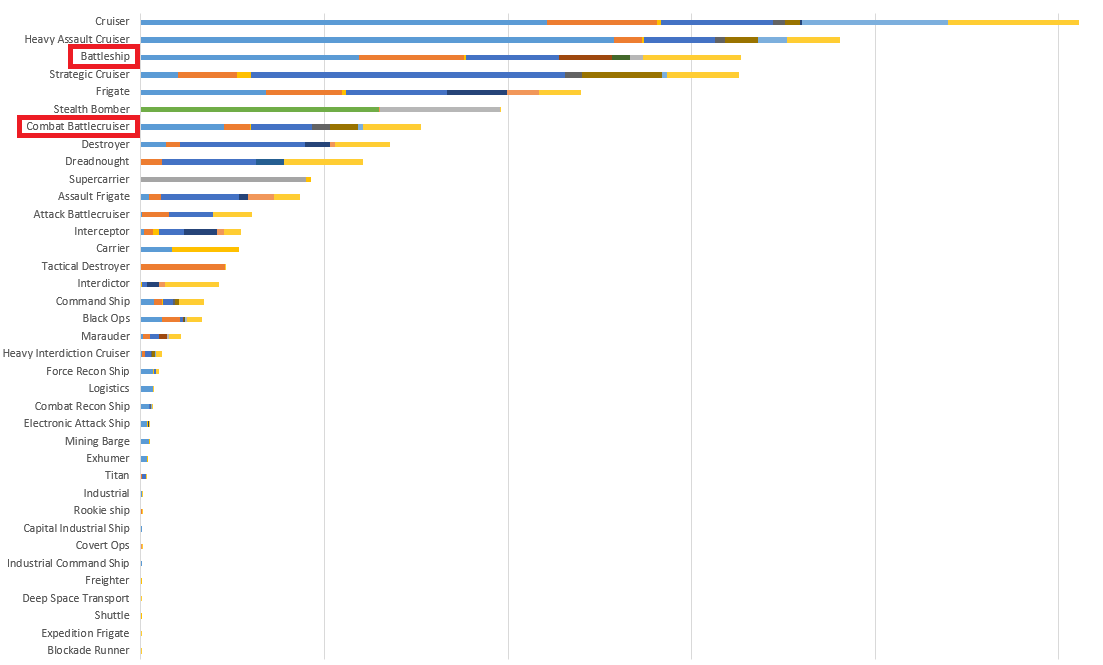 I mean, have a look at this. The colours, as far as I can tell, from the left is drones, lasers, projectiles, rails...something, something. Not really sure. But it's pretty clear that HACs are doing well solely from drone DPS. Wonder which one that is?

CCP's explanation for keeping the warp speed, align and slough-onto-grid behaviour of battleships as they are is pretty weak. Yes, battleships do a lot of DPS when they get used. But they are far and away being used in large engagements not for roaming. It would also be interesting to see a breakdown of that damage graph by security status, and by target - do battleships just do most of their DPS versus structures?

The T3 changes are good. We will see less bricked to the nines 150K EHP buffer Tengu and Proteus. It will now be closer to the 80-120K range. Which is fine, lets not get too het up over this. Plus, you get (mostly) lower signature radius, and given these are cruiser hulls which can use the wake limiter, you can't really complain about more sig tanking.
Posted by Trinkets friend at 17:40